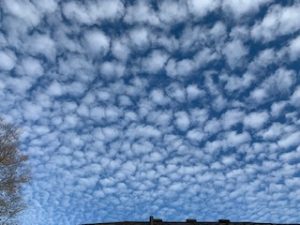 “Man’s chief end is to glorify God, and to enjoy Him forever.”
Westminster Catechism

Southern Ontario, because of its proximity to the Great Lakes, often experiences overcast skies, sometimes for days on end.  Many times the early morning’s sunshine lasts only for a few hours before the cloud cover moves in.    This January particularly was stingy with the sun rays, with the only benefit being  (possibly) the milder weather.

The grayness of winter seems to breed discontent along with various colds and flu bugs.   When unsettling headlines make me want to avoid the news, when people try to whip up hatred politically, when bigots intentionally fuel the fires of discord, it certainly can seem that my best option is to take my prickly feelings into hibernation.

I am called to be in the world, but not of the world.  Sometimes that seems an impossibility, because there are so many beguiling voices in technology, science, art, world view, the culture itself.

When we read the history of the nations of Israel and Judah prior to the Babylonian exile, they so often incorporated the pagan customs of the nations around them.  They forgot the God who had freed them from slavery and sustained them in a desolate wilderness, who had given them guidelines so that they could prosper in the land he gave them.  As a result, they became slaves all over again, a vassal state or dependent on precarious alliances.  Religion became an incessant need to appease wood and stone idols with imagined powers.

We think we would never be like those primitive peoples, but idolatry hasn’t conveniently gone away.   One way to identify it in our lives is to understand that whatever we put ahead of God, good and pleasurable as it seems,  is never enough.  There’s never enough money for security, never enough drugs or alcohol or sex, never enough popularity, never enough sacrifice or “religion.”  If I center my life on myself, I will never be enough.

We look for meaning and value in them, but ultimately the priority we give to  idols enslaves and desensitizes us, and we can become trapped in an addictive downward spiral.  They steal our lives with their craving, and we are eventually left with emptiness, disillusionment and regret.

When we realize it is God who gives us all we need in His love and providence, we can direct our worship truly to this amazing Creator God.   The breath of God awakens us,  our senses come fully alive to enjoy all good things in their proper place.    Our lives are lit up through the beautiful sunshine of His abundant goodness and grace.

This past season was the first time many could celebrate the festive season somewhat freely with friends and family, so it felt extra special.  But there is something of a relief in being back to what the church calls “ordinary time.”  So much of our lives are lived in events as “prosaic as a hiccup,” Alice Munro would say.

My memories of the workaday world of punch clocks and turnstiles into factory and office have receded.    The years of working have yielded their reward in retirement, so life is more leisurely.  Nowadays, it’s usually seeing the school bus picking up neighbourhood children that prompts a beginning of the day’s chores.

And it is the simple stuff of our day to day existence that proves to be the real treasure.  Once you take the hurry away, even a small routine like washing breakfast dishes can be savoured.  There is time to sit down between tasks and ponder what to do next.

Even boredom has its place.  That at-loose-ends Sunday afternoon years ago led to rooting around for something to do, which led to the keyboard being unearthed from its basement shelf.  The love of music, lying dormant since childhood,  awakened new potential years later.

Annie Dillard said that “how we spend our days is of course how we spend our lives.”  2023 is still mostly a blank page.  May your life this year be blessed by all the “ordinary” things in your days.

The Power of Littles

Great events, we often find,
On little things depend;
And very small beginnings
Have oft a mighty end.

Letters joined make words
And words to books may grow.
As flake on flake descending
Form an avalanche of snow.

A single utterance may good
Or evil thought inspire;
One little spark enkindled,
May set a town on fire.

What volumes may be written
With little drops of ink?
How small a leak, unnoticed,
A mighty ship will sink?

A tiny insect’s labour
Makes the coral strand,
And mighty seas are girdled
With grains of golden sand.

Our life is made entirely
Of moments multiplied,
As little streamers, joining
Form the ocean’s tide.

Our hours and days, our months and years,
Are in small moments given;
They constitute our time below –
Eternity in heaven. 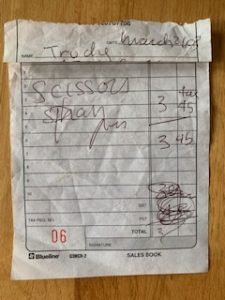 As a scatterbrained youngster, I was forever forgetting or losing things.  A classmate may not have minded occasionally lending a pencil, but I was very reluctant to hit up the same person each time when I forgot mine at home  . . . again.  I once left a perfectly good dress in a bag on a Greyhound bus.   When I see Lost and Found boxes now, it appears that I am not alone.

Just before the pandemic hit, I had a problem with the pedal on my sewing machine, so took it in to Baskins fabric store in St. Thomas for repair.  When I went to pick it up, much to my surprise,  the clerk asked if a scissors they had in a box could possibly be mine.  It had a tag with my name and old phone number on it (we’d moved in 2010).  Note the date on the invoice for scissor sharpening – 2003!  I had missed that scissors, had wondered about where it could have gone, but given up searching and bought a new pair years before.

Somehow I’d forgotten that I’d ever taken it to the shop.  Baskins had faithfully kept my scissors from 2003 to 2019 in the hopes I would one day come in to get them.

Work was busy in those years.  Life was eventful, there were crises to survive and overcome.  But in that time, there were faithful people who held my place or possessions until I could come back to claim what was rightfully mine.

This help can be practical, but isn’t always in tangible form.  Sometimes just the predictability of worship services at church set a comforting and encouraging rhythm so that I could keep on track.   Someone did the work of planning and serving so that could happen.  Someone kept safe the gospel hope to return it to me when I’d long forgotten it in dark days and ordinary ways.

I did feel somewhat foolish about my forgotten and abandoned scissors, which must have been tucked away in some corner in the shop for years.   But the owner of Baskins laughed and told me that I didn’t need to pay the sharpening fee anymore.

My uncle said once that money could bring happiness, contrary to what he’d heard.  He found such joy in giving his wealth away.  Those gifts multiplied many times over as they encouraged other givers.  So people’s lives were nurtured and restored, and they in turn were granted the privilege of giving to others:  the gifts just kept on giving.

Gifts don’t even have to be new.  Our grandchildren range in age from twenty to six years of age, but each child, from toddlerhood till their knees could no longer squeeze into place, has ridden the second-hand tricycle my sister donated when her own children outgrew it.  The tricycle was certainly not comfortable – it was so old that no seat cushions could be found to adequately cover the old metal seat plate.  That in no way stopped each child from zipping around our basement with glee. Once we found out we could link up the old steno chair with its free-wheeling base as a trailer, the fun was on.

One of last year’s gifts was a bonus, as it came in an old photo storage box – just the thing I’d been looking for in which to organize and keep old photographs.   I felt like a small child, as distracted and happy with the box as with the gift itself.

Sometimes the gift is Presence.   Our home offers us its gift of sanctuary, so that we can bask in the afternoon sunlight, winter cozy.  Outside, the Christmas wreath hangs on our front door and spruce woodchips from a local tree service scent our garden beds and walkways.  The bright hues of Christmas lights on our small tree are mesmerizing.

It’s Christmas time and we celebrate the awesome gift of the tiny child in a manger.  Even the poorest of us has been given such riches.  Gift that the Giver gave of himself, true abundance and ever-flowing life. 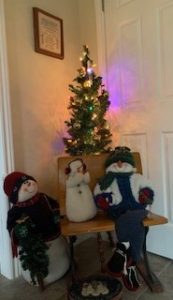 In the early 1960s, our school in Hamilton still furnished their classrooms with rows of old-fashioned wooden desks, attached to each other.  They were marked up by decades of fidgety youngsters and leaky inkpots.  When they were replaced by the newer, shinier individual desks, the old ones were stored in our barn for years, along with old milk cans and other stuff destined to be part of the antiques world some day.

And that’s how I ended up with this particular item, evidently the row’s back seat.  It has a sentimental value, like many other things in my home. There’s the sampler I stitched in my 20s, reminiscent of the needlework young girls would make years ago.  There’s the cookie tin that belonged to my Dad’s mother, the only tangible item we have that belonged to her.  There’s the doll, wearing clothes that once fit a baby daughter.  There’s the jazz singer statue we picked up in New Orleans.  There are the children’s gifts and the Mother’s Day cards. 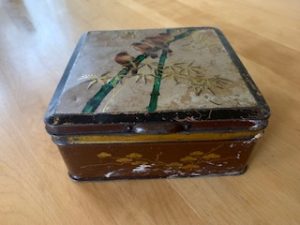 When we had to clear our parents’ home, we took the precaution of asking our aunt to go over things before they were recycled or discarded.  They weren’t necessarily things that would be valued on the market.   The old couch that we lounged on as teenagers was still in use forty years later.  There were the leather hangers my uncle had made.  There was the first radio my Mom bought with her first hospital wage earnings.  It was costly at the time, but she had an amazing radio reception from her perch on the Hamilton escarpment, sometimes even tuning into Dutch broadcasts.

It’s Christmas time, and again we bring up the boxes from under the basement stairs.  Many ornaments have been part of the collection for years.  The tree is smaller, but the creche, Sinterklaas, the carol singers, the angels, the nutcrackers are arranged once more around the room.  The wreath is hung up on the door, and the snowmen arranged in the front hallway.  It’s not even for the kids, as the family Christmas isn’t here this year.   It’s for us.

In a children’s book much beloved by my children, a young boy named Wilfrid Gordon McDonald Partridge reaches out to an old woman to help her remember again.   A shell stirred up memories of the wonderful summer days when she collected them on the beach as a child.  Similarly, as we hold them in our hands, things seem insignificant, but they remind us of people and places and special times of our lives.

So, for now, they’re staying.