“When Paul and his companions . . . came to the border of Mysia, they tried to enter Bithynia, but the Spirit of Jesus would not allow them to.”   Acts 16:6

We’ve come to the end of 2021, in many ways a very challenging year.  Though we have experienced grief, loss and restriction, there has also been joy and gratitude for the simpler things in life, for healing and growth.  It’s good to pause and contemplate for a moment before we step into the future.

Perhaps we need to make sure that we don’t drag old debts along with us into a new year.  Perhaps we need to let go of old grudges.  “To mourn a mischief that is past gone, Is the next way to draw new mischief on,” says Shakespeare (Othello).

Perhaps there are dreams or relationships that haven’t worked out as we had hoped, but it’s unproductive to keep banging away on locked doors.  We need to turn around and discover what else God might have in mind for us.

Our daughter has a dog-walking business, and for a number of years, happily rented farmland to allow the dogs freedom to run.  But things became complicated when the neighbours there had young children come to live with them.  By itself that may not have been a problem, but when food was also set out on this adjacent property as hunting bait, the dogs were continually attracted to it.  Snow fence barriers and other tactics were tried, but nothing proved effective.  Eventually it was clear that the old arrangement was no longer workable.  In perfect timing, a farm just up the road was now available.  If this had come up sooner, that option would not have existed as the pasture had been let for grazing cattle.  It took some adjustments, but the dogs are now happily exploring their new environment.

It is sometimes very difficult to discern the way ahead.  But, regardless of our circumstances, one thing is certain.  The way back, the past,  is closed.  Like a baby coming to term, our current safe place will eventually banish us.  Like an eagle trains her young, life becomes increasingly uncomfortable until we are forced to fly.

In his book, Let Your Life Speak, Parker J. Palmer tells of his friend Ruth’s wisdom at a time of searching in his life:

“I’m a birthright Friend,” she said somberly, “and in sixty-plus years of living, way has never opened in front of me.” She paused, and I started sinking into despair. Was this wise woman telling me that the Quaker concept of God’s guidance was a hoax?
Then she spoke again, this time with a grin. “But a lot of way has closed behind me, and that’s had the same guiding effect.”

Our perspective can be narrow.  It’s only later that we see the wisdom of not having gotten our way when we desperately wanted it.   God’s guidance for us always comes out of love, whether it’s “Yes” or “No.”  His timing will always be perfect, so we can trust that.

Through way closing, or way opening, may you experience God’s guidance to live abundantly in the year ahead!

In the cold northern hemisphere, it’s the shortest day of the year.  The long nights of a wintry season have always provided ideal opportunity for a community’s storytellers to spin their stories of historical figures, folk and fairy tales, as their listeners sat spellbound around a flickering fire.

Though the light now comes from my computer screen, I am no less enthralled by the stories of King Arthur, told in a library Great Course by Dorsey Armstrong.  After the Romans left Britain, Arthur was the courageous leader who turned back the Anglo-Saxon tide invading from the east, around 4-500 AD.   No one can really tell how many of these legends are fact, or whether they’ve been added to or exaggerated over time.  Many of them have fantastical elements that stretch our credulity, but we still lean forward to listen, get caught up in their danger and suspense.

Our local Elgin Writer’s Guild hosted Kayla Geitzler as our virtual writer-in-residence this past fall.  Especially interesting was the workshop on (Re)Telling Your Own Fairy Tale.  Admittedly, I am someone who took a whole course on Cinderella as part of my English studies.  These stories have survived, been handed down, because their message rings true.   They often favor the vulnerable and the underdog, and highlight the importance of the details of our lives.   Words can be charms, spells, or curses.  Objects can be magical.  Heroes are sent on quests, must pass some kind of test,  or resist strong temptation.

In the years when my work was housecleaning, I often felt that, like Cinderella, I was missing out on a glamorous ball somewhere.  At that time, the Prins in my life was working for a shoe company called Tender Tootsies.  We used to joke about his deliveries of soles and heels.  So there was a visceral recognition when Kayla noted that fairy tale themes often include feet and shoes.  And who’s to say that fairy godmothers aren’t present?  Perhaps they exist in our very genes.

As in folk tales, words and kind actions are still magical today.  They can make a great difference in someone’s life.  In his discussion of addiction,  Gabor Mate writes, “there are also many subtle, invisible (factors) that may positively influence our psychic strength and our capacity for choice:  a kind  word spoken long ago, a fortuitous circumstance, a new relationship, a flash of insight, a memory of love, a sudden opening to faith.”   We not only live our own mythical lives, but participate in the stories of others.

Sometimes the darkness can be too difficult to navigate alone.  We need to gather, in whatever way possible, to give and receive from others, whether they are people in our lives or people who lived long ago.  We need the cautionary tales, the admonitions to pay attention to the circumstances of our lives, the mirroring to confront ourselves.

Stories have many different facets that we comprehend only after returning to them again and again.  They open up their insights as we ourselves change.  And our story reveals itself as part of a much greater story. 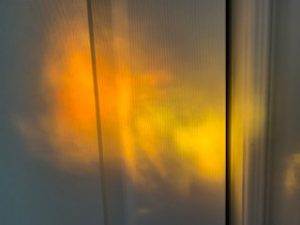 With beautiful poetry,  imagery and stark honesty, the Old Testament Psalms can exert a gravitational pull that draws us in to worship, to question, to lament, to give thanks.   Jesus quoted from the Psalms, his life story already portrayed in the truth of its words.  The psalmist looks at the awesome world around him and marvels at God’s presence and power in the universe around him, but also in the heights and depths of human emotions.

Recently, I have been meditating on The Lord’s Prayer, a prayer I’ve heard hundreds of times., said so often in rote that it can come tripping off my tongue without comprehension.  The language is archaic, and the association of a heavenly Father is difficult for many who have no idea of what that would mean in their lives. Our earthly father contributes the X or Y gene that determines our gender.   A loving father assumes responsibility for the care of his child even before it is born.

It occurred to me that there could be a psalm-like metaphor that would work well with the Lord’s Prayer.   We aren’t like the ancients, who worshipped the sun.  Science has proved that the sun is a star, burning hydrogen, helium, oxygen, carbon, neon, and iron.  But we understand God as Light of light, the world’s Light-giver, the generative force behind all that we see in the earth.  Our Father.

Our Father, in heaven, hallowed be Thy name.   Like the sunlight diffuses over all, giving life and sustenance and hope, may You be known in all the earth.

Your kingdom come, your will be done, on earth as in heaven.  May we respond to God’s fatherly love as the earth responds to spring sunlight, track you as the sunflower follows the sun.

Give us this day our daily bread.  Nothing in our fields will thrive without exposure to this sunlight during the growing season.  We are totally dependent on it for our food.

That we not be led into temptation, deliver us from evil.  When we are tempted to wrongdoing or want to cower in shame, keep us from hiding away from the light.  We need its clarity to have vision, to keep from stumbling on treacherous paths.  We need its healing properties to address our pain.

For thine is the kingdom, and the power, and the glory, forever.  Amen.  We pray for a kingdom where our Father’s justice, and power, and glory shines forth each day, and forever.  In some small way, to do the things that already reflect this reality, and someday look forward to its complete fulfillment.

No, we aren’t sun-worshippers.  Though, once, as a shaft of sunlight broke majestically through the clouds, the toddler in my car shouted, “Hi, God!”  Our Father, the Creator of the sun,  reveals who He is by his handiwork, and so “forward we travel, from light into Light.” *