This poem was first written up as a group participation activity, just a fun way to include everyone’s inner poet.  At the end of the couplet, the audience is given the opportunity to fill in the rhyme.  Suggestions are given, but there’s always room for creativity! 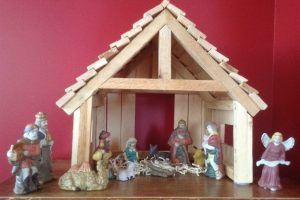 Together tonight we’ll tell
A story that’s wondrous to hear
I will say my part
And you can make it clear.

Each part of this story
Will be told in a rhyme
And then I’ll stop and wait for you
So you can finish up the line.

In Nazareth, a long time ago,
Mary was engaged to Joe.

An angel came with a message to tell:
The angel’s name was Gabriel.

The angel told the young girl Mary
That she was to bear a special baby.

“God loves us all and greatly he pleases.”
The messenger said – “Name the child Jesus.”

But when the time had nearly come
Mary and Joseph had to go to Bethlehem.

For the emperor issued a world-wide decree.
“Taxes from all, I demand!” said he.

When they got to the town, to their dismay
They found there was no place to stay.

After searching long, Joseph was finally able
To find shelter with animals in a stable.

And in that place, in lowly birth
He came to us, king of heaven and earth.

Out in the fields, while watching their sheep
Shepherds were nearly falling asleep.

When angels round them began singing just then
“Glory to God, peace on earth to all men.”

“in a manger,” they sang, “the babe may be found
In swaddling clothes he has been bound.”

“Though this child may appear like any other one
He is our Saviour, Christ the Lord, God’s own Son.”

The shepherds, seized with great curiosity
Hurried to Bethlehem, this child to see.

When they saw him they were amazed
And coming home, God’s name they praised.

In a far Eastern land, three wise men watching nightly
In the dark sky saw a star,  shining so brightly.

Of all the stars, its splendour was best
And it shone brilliantly towards the West.

“It must be a sign, the sky so to adorn
Surely somewhere a king has been born!”

The star guided them on and on
Until over the house in Bethlehem it shone.

Then from their camels, they dismounted with joy
They gave their gifts, and worshiped the boy.

Of this child’s life I’ve told only the beginning
Wonders more we could be singing.

Of his life, and his death – how great was his love!
How he was raised and ascended to heaven above.

But for this evening, for now, my friend.
This poem, like all mortal things, must come to an end.

We’ve set our clocks back for the fall once again, and it’s amazing how much adjustment that takes, especially for our young grandchildren.  Our bodies can’t always be adjusted the way we re-set the hands of time on our clocks.

Time isn’t really malleable, but it can be perceived differently.  The passage of time can seem agonizingly slow when we’re waiting for holidays or speed on wings when we’re out for an evening of fun.  And when we rush through our life, we miss so much of what is beautiful around us.  Carl Jung once remarked that “hurry is not from the devil, hurry is the devil.”

You need time for the ingredients in your slow-cooker to simmer and the spices to marry.  Wine mellows over time.  I learned in college that if I chose my essays topic early, all sorts of serendipities enriched them.

The Bible refers to a “fullness of time,” a metaphor that reminds us of sands in an hourglass, or the time of waiting for a child as it develops in the womb.  καιρός is an ancient Greek word that means the right, critical, or opportune time.  It’s refers to timing, our sense of the right time to act.  It’s a valuable skill in a fast-changing world.

God chose the time of our birth, and his gift of eternal life is limitless time.  I’ve wondered sometimes. If I have eternal life, is there a part of me that is already in the eternal presence of God?  And if that’s true, do I have access to the wisdom of perspective of this “self” already now, like a guardian angel?

There are so many questions, but we do know that we want to spend time with those we love.  When we spend time in the presence of God in prayer, we can feel that all-encompassing love.  In taking “time to be holy,” we are made whole. 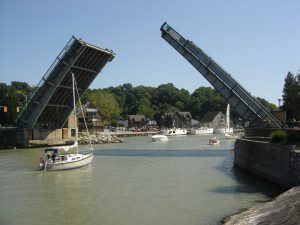 I’ve always loved words and can’t imagine a world without books.  But more and more, it seems as if words can’t capture the essence, can’t fathom the depths of the soul, unless they evoke vivid images.  It’s why Jesus taught lessons in parables, using the everyday things around him as metaphors for deep truths.

For example, I can tell myself to let go of past hurts in plain language.  But it’s far more effective when I picture these resentments as boats leaving a beautiful harbour.    And, in fact, that’s the imagery the old adage uses in warning us against harbouring grudges.

A mental picture can convey a clarity.  There’s a children’s game called Monkey in the Middle, where the child inside the circle attempts to catch the ball the others are keeping away from her.  It’s a frustrating game for that child.  Often misery comes from believing others are withholding something essential for our happiness.  When we picture the problem as that kind of game, you realize that it’s an illusion and you do have the freedom to walk away.

Dreams communicate truths in their cryptic symbols. Years ago, during a dark time, a dream about a beautiful underground garden with pink-blossoming trees was a source of comfort and encouragement.  Every spring, when cherry trees blossom, I’m reminded of that dream and how it gave new hope.

The picture is our common speech, understood all over the world, comprehended before we ever speak a word.

“How sweet are your words
to my taste; sweeter than
honey to my mouth!”  Ps. 119

“Who dares to teach must
never cease to learn.”
John Cotton Dana

When we were in our early teens, it was expected that we attend regular Tuesday night catechism classes so that we could receive a good training in foundational beliefs.    In retrospect, the church leaders who taught these classes deserve a lot of appreciation for giving of their time and energy.  For myself and my sisters, this meant the opportunity to buy candy at the nearby corner variety store, which considerably sweetened our learning on those nights.   Country living didn’t offer such amenities!  Looking back, I wonder if this association reinforced learning and helped us to retain important truths.

Learning has continued to sweeten my life:  ancient wisdom and new technology, old hymns and modern choruses, poetry and science, fiction and biography.  And, when it was my turn to teach, the learning continued.  Children could enlighten and amuse  with their simple perspectives, as they did one Sunday morning in my Grade 5/6 class:

Boy:  “Girls cause most of the problems in the world.  It’s all because of Eve.”
(Girls are taken aback, but only temporarily.)
Girl:  “Well, the snake was a boy.”

A new twist to the old blame game!

Albert Einstein once wrote to the young daughter of a friend “Study and, in general, the pursuit of truth and beauty is a sphere of activity in which we are permitted to remain children all our lives.”

We can take in instruction with the wide-eyed wonder of a child.    And, like the psalmist, we can taste and see that God is good.