We delight in your works, O Lord
And in the richness of your Word
And that creation’s endless glory
You fashioned for the human story.

So our lives are lit with splendour
By this gift that so reveals its sender
To you we always will belong
We are the loved ones in your song:

“The Lord will take great delight in you,
He will quiet you with his love.
He will rejoice over you with singing.”

When I read this passage from the prophet Zephaniah, it sweeps me up in its joy.   I can picture a small child in the arms of a singing parent, laughing as they dance merrily around a room.   In the story of Job, God reveals that, at creation, the  morning stars sang together and all the angels shouted for joy (Job 38:7)  It’s a celebration! God loves to share delight in his creation, rejoices over us as his cherished children.

When things are difficult, it can be a real help to recall happy times.   My co-worker Candice was in her thirties, but had never gotten her driver’s license.  With the permission of our manager, Shelley, to take the same lunchtime, we set out to practice driving.   After all, one person observed,  my nerves were already shot because I’d already been through this with three teenagers.

I don’t think I’ll ever forget Candice’s exuberance the day of her driver’s exam  – we could actually hear her coming as she ran up the stairs to our office to announce that she’d passed!  Right there and then, we danced our dance of joy.  To see a world open up for someone – the satisfaction was so deep it felt visceral.  Teachers must feel that thrill, and I think God rejoices when we achieve a milestone, too.  He loves to set people free from fears and limitations so they can live life to the fullest.

And I can’t resist, because while our dance of joy didn’t have the same finale as that of  the actors on the sitcom Perfect Strangers, they were our inspiration.   So, for your times of celebration, here is their YouTube video:

In the stone of this masterpiece, Michelangelo has so poignantly sculpted Mary’s sorrow that we are drawn into its depths.  In Jesus’ infancy, Mary had been told that a sword would pierce her own soul because of this child, and she must have viscerally shared his agony at his crucifixion.

Years ago, when my mother-in-law was deeply mourning the death of her 32-year-old son, she said “I hope you never have to do this.”   The sharp pain in the untimely loss of a child is recognized in cultures all over the world.   In Greek mythology, crops were imperiled when the grain goddess Demeter desperately searched for the daughter that had been snatched from her.

When the tragedy is so great, words can feel so inadequate a consolation.  Jesus had said that he would rise again, but to his despairing family and friends this seemed like mere talk. He had been betrayed, abandoned, had sustained mockery and savage brutality from his enemies.

In the hours of darkness, Mary stayed there, witness to her son’s pain.   In love, Jesus entrusted her to John, his beloved disciple, before He declared his work finished, committing his spirit to his Father.  And then there was the silence, the burial.

Labour pains are sharp pains, but in the joy of new life, these are forgotten.  Mary had to have been profoundly changed by what happens next, this incomprehensible mystery:  three days later, Jesus rises from death into glorious life.

As a seed falls to the ground, sacrifices itself so that there can be a much greater increase, so Jesus’ courageous decision to live and die in humility and complete humanity makes possible our own delivery from death into life.  Way has been opened for her, for us, for our sons and daughters, for all who want to live in the presence of God.

Alleluia, Christ is risen.
He is risen indeed! 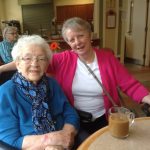 Last year we were given a great gift, a brief moment in time in which we could have the opportunity to connect with my aunt, Mies Simmelink, (pictured with daughter Nelly), and her family.  My cousins and I could bring the matriarchs of our family together at the nursing home cafe, and we could enjoy each other’s company.  My aunt was 101 years old.

I remember childhood dinners with ten kids along with the adults at her table.  I remember (and still have) the dress she sewed for my youngest sister Linda, and my sister Wilma still remembers the kindness my aunt showed to her in a time of trauma.

I find myself missing the presence of the senior citizens of my community in this time of COVID-19 isolation.  They have had rich and full lives and survived many hardships, emerging spunky and resilient.   They have accrued wisdom.  They are my landmarks.

In a recent TED talk by Hindou Oumarou Ibrahim, an African climate activist, she talks of a time when she brought scientists to her community.   When people began to pack up their goods, saying that it was going to rain, the scientists were confused.  Though the sky was cloudless, in a short while it began to pour.  The scientists were left scrambling to protect their belongings, but the elders of the tribal people knew to observe insect behaviour and take heed.   She points out that technology is perhaps a hundred years old, and modern science several hundreds of years old, but that indigenous wisdom is from thousands of years.

We have much to learn from our seniors’ years of experience, and we are the ones who have much to lose when we dismiss them as irrelevant.    There is so much potential for wisdom, and for joy in the interaction between generations.

In the last years of their lives, our elders can become focal points, drawing others to them.   They are the centres that hold together elaborate networks of community.  We are truly blessed by them.