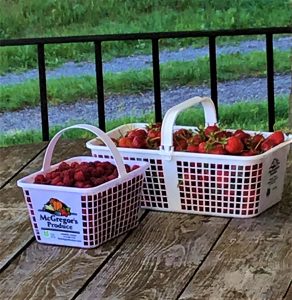 Last weekend, we spent some time in eastern Ontario, enjoying the abundance of fresh-picked fruit and homemade ice cream.   How satisfying are the simple pleasures of food in season, the love and hospitality of those who had gone to the effort to entertain and sustain us.

Yes, we are in a time of social distancing, and there was an odd disconnection.  Hugs were only shadow hugs, kisses just air kisses.  We kept our two meters apart, but there was still community in the sharing of food on the wide porch, in the enjoyment of summer with all its pleasures, in the stories of young and old.  The garden is yielding zucchini, peas, basil, and more, and its produce is generously given.  In a nearby blossoming basswood bees hover, hard at work.  The tree is equivalent to an acre of meadow in the gathering up of nectar for the farm’s hives.

In the early morning, before crowds arrived, there was time to gather at the nearby Madawaska for a dip.  Already the day shimmered with a promise of summer heat, and the river’s ripples glinted with the sun’s new-risen light.  It was a welcome refreshment for swimmers who happily splashed about.

And we had a taste of life in true simplicity for over eight hours because of a power outage after an early morning thunderstorm.  You forget, once you’ve left real country living, that this means water is no longer accessible, since hydro is necessary to run the well’s pump.  When electricity was restored, we were truly grateful.

In so many ways we have the the best of both worlds in technology and tradition.   In this difficult time, many of us have explored so many things on-line, hunted up old recipes and cooking tips.  We have taken the opportunity to re-visit the simple things and found them very good.  Truly, we have many blessings. 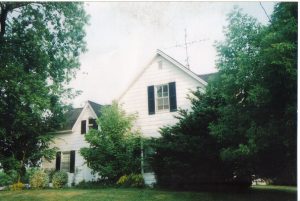 “This ole house was home and comfort
As we fought the storms of life . . . “
Stuart Hamblen

Our family moved into this old house in the spring of ’63, just before my only brother was born.  It sat on a 50-acre farm that also included a barn with an earthen ramp to allow hay to be stored in the loft.  There was a well with a stingy supply of water.

We had the freedom to explore, to ramble through its fields, pluck berries from the bushes near fence rows.  The pond was fringed with fuzzy bulrushes.  Over time we adopted a menagerie of animals.

The house had very steep stairs down to a tiny, damp cellar.   It also had a steep staircase which led to the second floor with an open room to the right.  To the left was a room that actually had a door.  There was also an attic of sorts on that floor, an unfinished, unused space that would surely have been useful – we were, after all, a family of five children.   No  attempt at major interior renovations were made; in those days the farm had the first claim to any financial investment.

In 2006, after a new house was constructed just behind and over to the left of the old house, a demolition company was tasked with taking the old house down.  The friend assigned to videotaping this accidentally took his finger off the recording button at the moment of explosion, so that the film only shows the standing house and then the pile of rubble. This pile was bulldozed into the old cellar along with earthen fill.  Today all that remains in a faint tracing on the lawn above.

I lived in that house from age 8 till I married and left at age 19.  It was a brief span of time in the scope of things, but when I think about the hardships we experienced in the time we lived there, it seems as if we were battered by more than gales.  As if there were forces bent on its emotional downfall far earlier than its actual destruction date.

On July 15, 1968, when the policeman first appeared at the door asking for my father, we sent him on to an uncle with a similar name, known for his speeding ticket escapades.

Only a short respite.

The devastating reality struck with the arrival of our minister.  My sister had drowned at Long Point on Lake Erie, where she had been vacationing with relatives.  The house shook with the grief, as in a violent storm.  Like the survivors of an earthquake, we were never the same.  The Sunday School stories of resurrection appeared to be nothing but a cruel hoax.

Life goes on, as it must, the living tending to the business of living, jobs, marriages, children.  But now that I am older, I think often about what it would be like to have another sister to share life with.  While my grief appeared secondary to the grief of a parent, there is also much loss when you lose a sibling.  She would have been someone to share life with, who would have had her own family and community to flourish in.  An entire world of possibilities disappeared in an instant, a trauma so deep it couldn’t really be accurately recorded.

Like the old house, so many memories have been buried from that time.  All kinds of emotions could be hidden underground:  grief, regret, loss, guilt.  They are hard to excavate, though you can still trace them on the surface far above.

There seems to be no earthly good that would be worth this sacrifice, not that we can understand this side of heaven.   But we have learned something, small as it is, about mourning with those who mourn.   And that our time, even if we live to old age, is really short.

Living fully in the moment, appreciating the lives of those around you, being awake and aware of the glory of the creation all around.  They call out gratitude.  This is the inheritance my sister left as a result of the short space of her lifetime.  They continue to be her gifts to us who remain, who must go on. 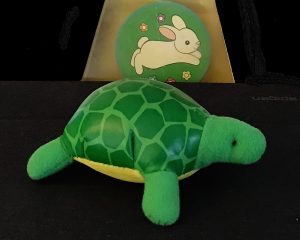 It’s interesting how phrases in the Bible can suddenly grab your attention.  Ahab, an Old Testament villain, is being threatened by the neighbouring king of Aram when he sends messengers with this retort.  It’s a rare bit of recorded wisdom on his part.

It just goes to show how human nature hasn’t changed a bit:  the golfer picking up his golf clubs to begin a game shouldn’t brag about his abilities, the couch potato who intends to go to the gym shouldn’t cash in those approval chips like the one who is leaving after a sweaty hour of exercise.

Years ago I received some good advice: between tasks, I should pause and take some time to consider before charging ahead.  In a multi-tasking world, it’s easy to get bogged down by activities.  Procrastination comes in many forms, including finding some sort of busy work as a distraction.

When you’re facing an important but difficult task, experts* recommend that you take time to contemplate before you begin.  It seems counter-intuitive to pause at the outset,  but it keeps you from settling for a lesser task, and it’s helpful in forming a plan.

Studies also show that it’s best not to tell many others about your grand project.  Although it may seem you are establishing accountability, often it turns out that you’ve just moved the rewards to the starting gate.  Having collected them prematurely, it’s hard to be motivated.  It’s better to break a job down into small parts, giving yourself small rewards along the way.  It may seem slow, but steady progress will get you there.    You may be surprised when you look up and see how far you’ve come.  As Aesop’s tortoise illustrates, this perseverance may even win the race.

In fact, it’s better not to share anything prematurely.  Perhaps it is because life has a lot of troubles, but when something possibly good is happening, the temptation is to rejoice, to share the news with others immediately.  Here’s where it’s also important to “count the cost.”

When we were children, we suffered through a summer of whooping cough.   My parents discussed taking us up in an airplane, hoping that a higher altitude would act as a remedy.  Likely they didn’t do the research into something – I suspect the expense – because I remember coming back from Hamilton airport, being told that it was “too cloudy” for us to fly.

The story arouses my suspicion – did planes really not go up on cloudy days?  Needless to say, our hopes were dashed, and I was well into adulthood before I ever boarded a plane. The point is, if you talk about something too soon, you’ve likely not considered all the angles.  After awhile, others don’t take your pronouncements all that seriously.  As fun as it is to spread joy and happiness, there should be a strong likelihood of possibility to avoid disappointment.

The essential thing, once you’ve made your beginning,  is to never give up.   The Langston Hughes poem below is eloquent about climbing on in all kinds of circumstances.

“Well, son, I’ll tell you,
Life for me ain’t been no crystal stair.
It’s had tacks in it,
And splinters,
And boards torn up
And places with no carpet on the floor –
Bare
But all the time
I’ve been a-climbin’ on,
And reachin’ landin’s,
And turnin’ corners,
And sometimes going in the dark
Where there ain’t been no light.
So boy, don’t you turn back.
Don’t you set down on the steps
‘Cause you finds it’s kinder hard.
Don’t you fall now –
For I’se still goin’, honey,
I’se still climbin’,
And life for me ain’t been no crystal stair.”

*
“How to Outsmart Yourself”
Great Courses, Peter M. Vishton,
William and Mary College