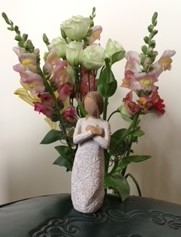 My imaginary childhood heroine was named Suzie, a choice likely influenced by the little girl who lived in the wealthy household where my aunt was working as a maid.  Sometimes when the family was away, I could stay with my aunt and revel in the luxury there.  Imagine, a princess bed!  Imagine, a real life attic you could play in!  Beautiful clothes, wonderful dolls and toys!  To a child of recent Dutch immigrants, such amenities were so far beyond having that it was the stuff of dreams.

That Suzie lived in a mansion that was set in a landscaped property at the end of a long, tree-lined driveway.  But if she was imported into my old farmhouse life, she was a princess in disguise who had been hidden away so that she would not be kidnapped.  Suzie was brave and strong, and never complained.  Suzie was the only girl, not one of four, a clear supply and demand devaluation.  In real life, people smiled at my little brother in sympathy and talked about what it would be like to have so many mothers.

But imaginary Suzie was feminine and pampered, and celebrated for being a girl.  She wore frills and lace and crinoline petticoats and fancy button shoes.  Even though you couldn’t get into our farmhouse attic, Suzie and I knew it was there, and we conjured all kinds of mysteries from the 100 years of its existence.  When my cousins would come for sleepovers, I would spin dramatic Suzie tales.

And Suzie was not above using her feminine wiles to get out of difficult situations.  I might be impulsive and klutzy, but Suzie was always graceful.  Suzie did not have onerous household chores to do, like polishing the silver on Saturday mornings.  Suzie didn’t have parents who were busy with work and a growing family.

There simply wasn’t time for frills and pampering in the immigrant struggle to establish homes in a new land.  In Europe, the women could take leisurely afternoons to do their fine needlework, but here that was a luxury only possible on wintry evenings. While my parents felt suspended in a kind of limbo between two worlds, we children struggled with shallow roots in the Canadian soil.

It’s only as time passed that I realized that this prosaic life, too, could be raw literary treasure.  Pragmatic, practical people lived workaday lives, but they also loved to gather to recount adventures, to laugh uproariously at some of their predicaments and misunderstandings with language.  A different kind of art emerged from the stuff of their lives and their hardiness.   So that being feminine also revealed resourcefulness and pluck, and a strong determination to endure.