“I was ashamed to ask the king for soldiers and horsemen on the road, because we had told the king,  ‘The gracious hand of our God is on everyone who looks to him, but his great anger is against all who forsake him.’  So we fasted and petitioned our God about this, and he answered our prayer.”                Ezra 8:22-23 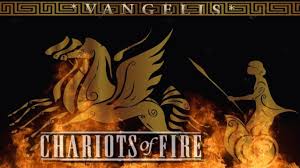 In the movie Chariots of Fire, based on a true story,  Olympic contender Eric Liddell chooses to honour God, an integrity that could cost him a chance at a medal.   He refuses to run in the qualifying heats that take place on the Sabbath, but God opens a way through the generosity of Harold Abrahams, his competitor.  And Eric, who feels that his running is an act of worship, who feels God’s pleasure as he runs, is free to compete.

I listened often to the record of the movie’s soundtrack when going through a difficult time, a time when  I sorely needed to feel God’s protection.  Van Gelis’ stirring rendition of Jerusalem, the lyrics that had been written by William Blake, could lift my spirits to look beyond the difficulties of current circumstances.   Like Ezra, focused on the goal of reaching Jerusalem with thousands of exiles through dangerous territory, like a runner focused on the finish line, the difficulties were bearable when I learned to trust God to keep me safe.   I could lift my eyes to the finish line, the coming home.

In times of peril, God has clearly shown that his people need not fear.  There are angelic armies and spiritual chariots of fire all around to defend them. Praying for God’s guidance gives the groundwork for practical steps.  Ezra, under a great responsibility for people and temple treasures, divides the valuables among people of character, entrusting them to guard them until they can be accounted for on arrival.  We are responsible for acting on the instructions and guidance we receive.

It’s the last day of 2019, and we have no idea what will happen in the year to come. But we pray the blessing and wisdom and guidance and protection that God has always promised those who trust Him, and then we turn our face toward God’s kingdom, taking joy in the journey. 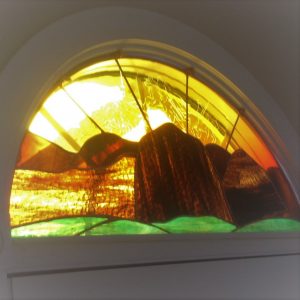 “Light of the world,
You stepped down into darkness
Opened my eyes, let me see.
Beauty that made my heart adore you
Hope of a life spent with Thee.”
Tim Hughes

At night, in this time of winter solstice,  bright lights of Christmas celebration festively adorn my neighbour’s trees and houses.  I love the magic and mystery of light in the darkness.   By day, winter sunshine spills through my  windows.  Light and shadow interplay and I soak up the sunshine, appreciating it all the more since there is so much less of it.

On the night Christ was born, the angels’ celebration lit up the whole sky.   The wise men followed a bright star in the sky to worship this King.   Jesus, the Light of the World, gave up his heavenly privileges to fully participate in our humanity.    He came to light up our way, so that we will never have to walk alone in darkness or sorrow or despair.

“I heard the voice of Jesus say,
I am this dark world’s light
Look unto me, your morn shall rise
And all your days be bright.

I looked to Jesus and I saw,
In him my Star, my Sun
And in that light of life, I’ll walk
Till traveling days are done.
Fernando Ortega | Horatius Bonar | John Bacchus Dykes

Wishing you all the blessings of Christmas! 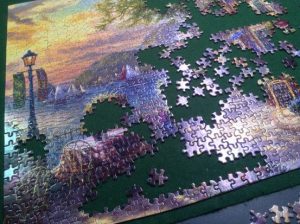 Once we get into colder weather, puzzling is one of my favourite indoor activities.  The green felt puzzle mat comes out and the entire ping pong table is commandeered to spread out the 1000 pieces for easier sorting.  It’s helpful to leave this project in the basement where it can act as kind of a default activity.  And I’ve learned a few things since taking this up a few years ago.

First, it’s better to work for short periods of time.  Somehow, stepping away and coming back with fresh eyes works wonders.  Where just hours before, the search became frustrating, now the pieces appear.  In fact, sometimes it feels as if it’s an unconscious knowing that guides your fingers.    In a kind of incubation process, my brain takes in the visual information and continues to work.   It just needs time.   On one occasion when I pointed to a couple of places that needed what I thought were easily identifiable pieces, and implored “why can’t I find these?” they showed up within minutes.  Discovering this made me feel a whole new respect for brain potential.  And the feeling, perhaps, that I just need to be a little more specific when I ask for things.  Maybe formulating the right questions is effective when looking for results!

Secondly, sorting by shape, and colour recognition sharpen the ability to recognize patterns.  I was brought up in a culture that greatly valued work and production.   The benefits of play weren’t as easy to quantify.  My father was in his eighties when my sister tried to encourage a puzzling activity that would have been good for improving his dexterity and co-ordination.  He called it “a waste of my valuable time.”  This was said with a smirk, because his time as he recuperated from surgery wasn’t really being spent doing anything else, and he knew it.

Third, persevering when progress on a puzzle is slow is an exercise in learning patience.  I’ve learned that giving up doesn’t mean for always.   Just because something is not possible now, it doesn’t mean it will be impossible forever.  Just because I don’t see a picture emerging in my circumstances right now, it doesn’t mean that the pieces won’t someday fall into place.    And it’s very satisfying to stick around long enough to see that happen both when I play at puzzling, and in the slower processes of life.

The wet-milling corn processing plant where I worked for many years received corn harvested from local farmer’s fields.  A rich bounty of gleaned corn from the surrounding lot was available for the winter birds foraging to survive the cold.   Yes, the sparrows could be a nuisance, but there was also something thrilling about watching them.  They had mastered the knack of living symbiotically with the humans in their environment.  It made me think about how God’s eye is on even these smallest of creatures, and how He reassures us all with His providence. 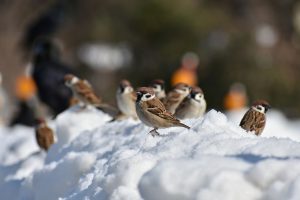 They throng around the lot
And swarm up to the warm
Steam pipes
And huddle there.

Kernels of corn
Pock the ground
And the sparrows
Chirp their treasure found.

On winter-nuded branches
They perch, like feathery fruit
On its black outlines
A darkly quivering tree of life.
Trudy Prins 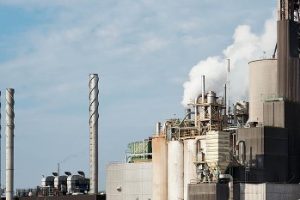