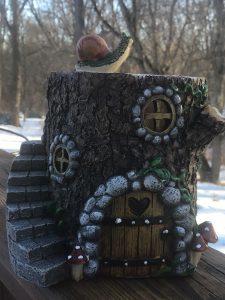 My sister-in-law kindly gave me the little woodland sculpture that captures some of the whimsy of a forest home, even to suggesting a snail’s pace atop the stump.  I’m not sure if she was aware of how apt a gift it was, whether I’d ever mentioned my childhood wishes to her.

When living with three sisters and a brother in a small farmhouse, one of my cherished dreams was to have a place of my very own, a “cabin in the woods.”  Both time and space were rare commodities, and my imaginary world envisioned a place far away from the hectic pace of the world around me.  Being a fantasy, of course, my rustic cabin would not have problems with bugs or mice, and I would happily live with only the barest of essentials.

I had never heard of Thoreau or his experiment in simple living on Walden Pond, but I understand that longing for solitude, and how he was weary of the artifices of society.   I wanted the same kind of freedom to just be myself.

Well, I’ve grown up and we are living in the woods, but admittedly with far more conveniences and square footage than I would have had in a tiny cabin.   The dream has not entirely disappeared,  although I don’t know if I could manage cabin living in the wild without internet.  There are logistical challenges that arise, for example, in lugging groceries through forest glades, and some thought would have to be given into bathroom amenities, which I’m sure wasn’t considered an interior necessity by actual pioneers.

In my solitary cabin in the woods
I’d need only some basic goods
A little desk, a place for a fire
Blessed silence is all I require.

The dappled sun, wind in the trees
Would gently waft the summer leaves
No rude interruption by anyone
To happily write till my work is done.

With the poet in blissful solitude
Taking the path less traveled through
To hear the birds’ symphonic choir
And seek a true wisdom to acquire.

But then, maybe this longing to come away, to simplify, is elemental, a yearning back to an original Eden.  As we are increasingly technologized and civilized, it feels as if we’ve lost that connection, and we’re being called home by Nature herself.

Perhaps it’s not too late to build a cabin in the woods . . . . ?  (This is getting my husband a little concerned!)

“No matter what he does, every person on earth plays a central role in the history of the world. And normally he doesn’t know it.”
― Paulo Coelho, The Alchemist

Recently I spent some time to again read Coelho’s story of an Andalusian shepherd boy’s quest for treasure:  it’s a simple but profound story.  Santiago’s journey centers around his Personal Legend, but he also comes to know that he is part of a larger story God has written.  As we all are.

When I was in grade school our teachers took pains to teach us legible handwriting, a skill that isn’t necessarily being taught today.  But handwriting is not the only way our life is told.  Our unique way of being is evident in the objects we use to decorate our homes, the photos we keep.  It is revealed in the places we go, the friends we spend time with, the books we read, even the searches we enter in Google.  Our origins and patterns are in our genetic code.    Our life paths leave unique traces of which we are only beginning to be aware.

Over the ages, human nature has been surprisingly consistent.  It’s important to know the legends of those who lived before us.  Ancient plotlines reveal precedents that echo in modern-day settings.    Mark Twain once said “History doesn’t repeat itself, but it often rhymes.”

The word legend comes from the French, meaning “what is to be read.”   Legend also describes a symbolic code which is the key to understanding a map; it allows us to read and navigate a terrain that includes both natural and cultural landmarks. Human nature exists bound up in Nature, and so we must learn to understand our world as our indigenous peoples read the landscape around them.

God is in Holy Scripture, but He is certainly not limited to it.  He continues to speak that Word into our lives today, so that we can courageously meet with both opportunity and challenge.  When God’s ways and God’s stories are written on our hearts we will also create legends in and of our time.

When our family was young, neighbouring children were always welcome to come over and hang out.  Our house wasn’t big, but  the activity and laughter was a joy to have around.

Michael, who can’t have been much more than 5 or 6 years old at the time, lived next door;  we’d often answer a knock and see his sunshiny, cherubic face.  He would ask whether our kids could play with him.  They were his official babysitters at times, so he felt at home with them.

One day, I answered the door to find Michael the Warrior standing there.   While Michael’s immediate family wasn’t religious, his extended family was, and he was wearing a costume given to him by his aunt.  He was in his Ephesians 6 regalia, and just had to come over to show us.

In the Jewish scriptures, Michael is the archangel warrior, the prince and protector of Israel.  He is also recognized in Christianity and Islam,  a healer and slayer of dragons.  In Revelation 12:7, we see Michael fighting a battle against the the devil and defeating him.

People want to name their children heroic names; it’s seen as kind of a blessing, or sometimes a remembrance  of someone powerful or dearly loved.   We are more casual about names than people who lived in Biblical times; then it was felt that a name also conferred a calling.  Patriarchs Abram and Jacob were given new names when there was a major shift in identity.

Perhaps we, like innocent children,  have no idea of the epic scale of some of the concepts at play in the world.  The great story of the battle of good versus evil echoes in hundreds of warrior stories.  They are told in obscure places, and set in cultures and their mythologies.

While our children are yet small, we want them to be equipped with all the armour of God to endure and prevail through all the hardships and perils of life.  As adults, we still need all the spiritual armour available to us.

“Therefore, put on the full armour of God, so that when the day of evil comes, you may be able to stand your ground, and after you have done everything to stand.  Stand firm then, with the belt of truth buckled around your waist, with the breastplate of righteousness in place, and with your feet fitted with the readiness that comes from the gospel of peace. In addition to all this, take up the shield of faith, with which you can extinguish all the flaming arrows of the evil one. Take the helmet of salvation and the sword of the Spirit, which is the word of God.”
Ephesians 6:13-17

Sometimes, wisdom is revealed from the mouths of babes.  Like it was the day Michael the Warrior showed up on our doorstep.