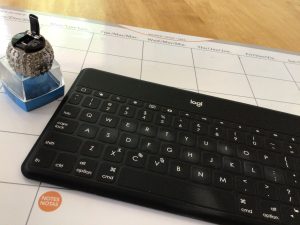 “The quick brown fox jumps over the lazy dog.”

Quickly I tap my typewriter keys
What a wonderful way to play!
Encoding, inscribing, letter by letter
Type it once, then make it better.

In the early ’70s, if she wanted doors to open in the working world, an aspiring young woman could do no better than to hone the accuracy and speed of her typing skills.  Our high school typing lab was fitted with ancient manual typewriters, the room resounding with a cacophony of clacking and ringing.  As I transcribed my handwritten class notes to prepare for exams, my ability improved.  A personal interview for a position wasn’t even considered until you’d first proved that you were an excellent typist.

By the time I began my first real job in 1973,  typewriters were electric, and instead of clashing keys, the IBM Selectric used an embossed globe of all the characters.  This could be switched out for specialized vocabularies or mathematical symbols.   They were fairly expensive, which I remember well because I once dropped and broke one.

Offices still used Gestetners and ditto machines, and White-Out to correct errors (available in multiple colours for correcting the carbon copies below the original.)  We could not have dreamed the convenience of modern-day wireless keyboards and printers.  Cut and paste literally meant that somebody had taken a first draft, then cut and pasted sentences when re-arranging was needed.  Pages would have to be re-typed for each update.  Turning my talent into cash to help build our first home, I worked late to type manuscripts for economics students and professors.  The keyboard turned words into actual brick and mortar we could live in.

Perhaps the thing that’s most magical about the keyboard begins with the alphabet itself.   In some combination of the keys here is a story, even if I don’t know how to tell it yet.  The tale can travel from my head through my heart to my hands.  It can create imaginary worlds as well as real ones.  The letters on my typewriter keyboard, from the oldest manual version to the newest wireless wonder, have the same potential to create lyrics as an 88-key piano keyboard has to improvise music.  They are both tools, hold keys to new wonders, new worlds.   There’s musicality in words as well as notes, we take notes as well as play notes.  There are major and minor keys, harmonies and jarring juxtapositions.

Sometimes the limited vocabulary of our deepest need or greatest joy can be recalled by the printed word, can become a prayer.  Canadian storyteller Dan Yashinsky* tells the Hebrew story about the Baal Shem Tov, a Jewish mystic and healer and his faithful scribe who were endangered when the crew of their becalmed ship blamed the Jewish passengers.  They were in danger of being killed.  In his fear, Baal Shem Tov had forgotten all his mighty prayers, so he asked his scribe what he could recall.  “Slowly, painfully, the scribe remembered something:  the first two letters of the Hebrew alphabet.  He began, tentatively, to murmur them aloud:  ‘Aleph, bet.’  The Baal Shem Tov repeated the letters, and even these, the simplest element of language, had such power that they were saved from catastrophe.”

Whether a manual typewriter or the most sophisticated computer, we have a scribe that can carry a profound message.  It’s a miracle that a word written at a keyboard by a solitary person can reach out across time and space.  As people once gathered around the fire to listen to ancient tales, we now can receive a great gift, the wisdom of many others.

See the link below for a light-hearted look at an old typewriter in action:

One very great benefit of keeping journals is that re-reading them can not only take you back in time, but offer new insight with the benefit of hindsight.  So, perusing the writing of over 14 years ago, I came across this little incident.

It had been a tumultuous weekend.   At my parents’ home, I’d seen our old 1969 church directory that labeled each family photo by its patriarchal name only (for example, the J. Van Smith family).  In those archives, women and children were not named, effectively rendering them insignificant.  Just being reminded of these attitudes stirred up a smoldering ire.

It was a time when men, as breadwinners and heads of their household, could unilaterally make decisions that impacted the whole family.    The needs and wants and views of wives and children were seldom solicited or taken into account.

By Monday afternoon, after I’d come home from work, the anger had somewhat subsided.  When I looked out onto the front porch, there were two doves sitting contentedly, just looking out together.   And I was comforted by that scene.  Perhaps we could craft a peaceful way of being together, too,  if we followed them as our inspiration.

At times the animals around us can soothe us.  Our family dog, Kayla, would scurry away to her corner, an old unused shower cubicle in the back hall bathroom, if voices were argumentatively raised.  So that we would laugh instead, her barometer an indicator of stormy weather so that we could take shelter.

In the picture of a tiny bird battling heroically as storm winds threw her little body in different directions, I saw a metaphor for the tumult I was experiencing in making life-changing choices, tossed by inner gusts that threatened loss of control.  All of us, animal or human, are trying to be survivors as we make our way in a sometimes tempestuous world.

Through trial and tragedy, for every creature God expresses care and concern.  Nothing escapes His notice, even the smallest of sparrows.  Psalm 145 reassures us that we have a compassionate God,

The Lord is faithful to all his promises
and loving toward all he has made.
The Lord upholds all those who fall
and lifts up all who are bowed down.
The eyes of all look to you,
and you give them their food at the proper time.
You open your hand and satisfy the desires
of every living thing.

In season and out of season, living and dying, all of us from the tiniest of creatures to the giant behomoths of the sea are held in the hands of our loving God, the Creator who shaped us all.

None of us is ever insignificant or  invisible to Him, because He is the God who sees.