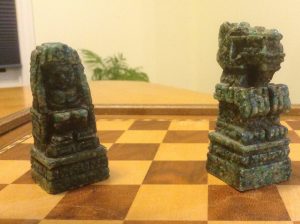 From time to time, we have encountered little life mysteries in our household.  One of them included these two somewhat ugly pieces with an apparently checkered past. They were dropped off specifically for my husband at the house one day when we were away.  We have never had a chess set with pieces that looked like that.

At the time we were billeting an actress with her young child, and so she answered the door when the bell rang.  The older man (bear in mind her description of “older” could be a relative term), who had come in a pickup truck, looked a little taken aback.  He gave her the two pieces with his instructions and left.

Unfortunately, she did not get his name, and we have no idea who this person was and why he thought we should have these.  It’s been several years now, and we’re no wiser now than we were then, though we have asked around our circle of friends and acquaintances.

Being of a literary bent and a disposition toward a vivid imagination, my mind goes to the possibilities this could create for a mystery story.   All over the area people receive these unlikely packages, and one day they are all brought together under mysterious circumstances.  Or knocked off the board, if you wanted a more sinister option.  Or you could do a variation of a chess motif in the plot line, the way Lewis Carroll incorporated a chess game in the children’s story Through the Looking Glass.

The child in me thrills, like childhood hero Nancy Drew, to the possibility of a mystery, of a search for obscure clues.   Life being what it is, the real explanation is probably something far more prosaic.  It’s just that we haven’t found it yet.

And maybe won’t ever.