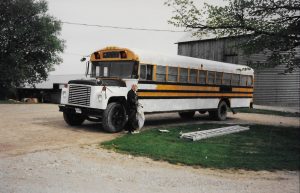 The farming life has its moments of absurdity, and among them was the time my father acquired an old school bus so he could transport pigs to market.

This was fine with the Ministry of Transportation, under the license designation of animal husbandry, as long as the bus colours were changed.  I imagine it could have thrown a few highway drivers into confusion otherwise!

In the photo above is my mother who is tackling the task of re-painting it.   Once a Slow Moving Vehicle sign was hung on the back, it was ready for its four-legged riders.  Pig passengers in place of pupils – most people laughed at the very idea.

At the time, it struck me as an excellent idea for a children’s story, but as I procrastinated, it never got any further.  Until it was too late  – Robert Munsch, in his book Pigs, featured a school bus taken over by pig riders, including a pig driver.

I’d often wondered why a farmer would want to raise pigs at all.  Pigs are categorized as unclean animals in the Old Testament.    I can still hear the sound of pigs squealing for their dinner, smell the pungent manure, see the pigpens that needed constant shoveling.   Since my father also had an off-farm job, that task often fell to my mother.  You would have to be a diligent farmer, or you would hear, smell, and see the evidence pretty quickly.

Although they are really smart animals, pigs have not fared well as literary symbols either.   The prodigal son languishes in a pig pen due to his dissipated life.  In Greek mythology, Circe (the daughter of the sun god), turns Odysseus’ crew into swine.  An apt metaphor for sun-induced sloth!

But in the pigpen, the wayward son comes to his senses.  After all,  he couldn’t really avoid them there!  Odysseus eventually gets his men transformed back into humans and  is  given valuable aid for his homeward way by Circe. Repentance and lessons and discipline, learned from a pigsty classroom.

Perhaps there’s even hope for procrastinators!