“There is only one Lawgiver and Judge, the one who is able to save and destroy.  But you – who are you to judge your neighbour?”  James 4:12

I’ve been reading a study on the book of James, a book that has an uncomfortable way of speaking directly to armchair Christians.  To James, faith is not faith unless it is accompanied by action.  He says that we need to be humble, to grieve our sins.  We need to stop the envy, slander, and quarreling that can destroy a community.

When we judge others, we take the law into our own hands, set ourselves up in God’s place.  We judge people for not keeping the law or our standards.  Even worse, sometimes we even judge others to be unworthy of God’s grace, especially if they’ve caused us difficulty or hurt us in some way.  We are the angry older brother, believing he had slaved without appreciation.  We are like Jonah, unwilling to do anything to facilitate restoration for the Ninevites who have been so cruel to Israel.

Sometimes we judge hastily, with casual arrogance, believing we have all the facts.   In the Divine Comedy, Dante has Thomas Aquinas, the Dominican friar,  offer a series of reasons why it’s so unwise to judge prematurely.

“Let the people, then, not be too certain in their judgments,
like those that harvest in their minds
corn still in the field before it ripens.

For I have seen the briar first look dry and thorny
right all through the winter’s cold,
then later wear the bloom of roses at its top.

And once I saw a ship, which had sailed straight
and swift upon the sea through all its voyage,
sinking at the end as it made its way to port.|

Let not Dame Bertha and Master Martin,
when they see one steal and another offer alms
think that they behold them with God’s wisdom.

For the first may still rise up, the other fall.”

Our senses can mislead us to make judgments of another’s character or competency from very little evidence.  Their deficiencies are sometimes glaringly obvious, while we forget to tally and be thankful for all the ways in which they contribute.  The church, as a caring, loving community, still can fall prey to petty grudges and habits of criticism.  But God’s servants are ultimately answerable to Him.  We wouldn’t think of criticizing someone’s child to his face, but God often hears his children find fault with each other.

And that why it’s so important that we focus our vision, that we  do not take our eyes off God’s providence for us.  We can always trust that He is concerned for our welfare.   Envy and backbiting  diminish as we remember that we can ask our loving Father for what we need day by day, that even the difficulties in our lives are uniquely planned for our ultimate good. 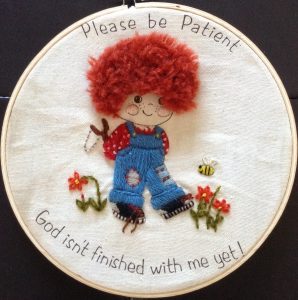