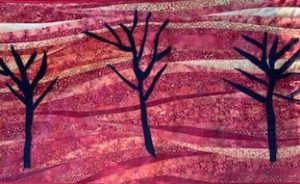 “Humans are notoriously bad at walking in a straight line,” observes Dr. Elizabeth K. Andre in her Great Course seminar on Outdoor Fundamentals, citing several examples from her group-leading experience in the back country.  We have little sense that we’ve veering in the wrong direction, and can easily find ourselves miles away from our intended destination.

As a kindergartner on her way home from school in the little village of Ancaster, I once found myself lost in a subdivision maze.   We’d only lived in the village a few months and I had somehow taken a wrong turn.  Even though there was a water tower landmark in the distance, there didn’t seem to be a way to navigate out.    Eventually my weeping attracted a sympathetic young mother at home with her baby, who called the police to help me find my way home.   You don’t soon forget that panicky feeling.

Our home now is above large ravines that cut down to the shores of Lake Erie.  When we first acquired the property, we thought it would be fun to explore this wooded area with friends, perhaps work our way to the lakeshore.  After an hour and a half of climbing over fallen logs,  hopping rivulets and avoiding swampy areas, we decided to climb up to see where we were.  Chagrined, we saw we’d arrived at a meadow only ten minutes away from home.  If we’d followed the road, it would have only been a 25-minute walk to the lake.

It’s not only in a physical sense that human beings have trouble keeping to straight paths.  We’re  intrigued by shiny things, make detours around obstacles and then get confused, we take short cuts, we’re pulled in different directions. We fail to be aware of our surroundings only to find that now night is coming on, and we have no idea how to get home.

At Sinai the Israelites were given clear instructions on God’s ways, laws that promoted harmony and wellbeing.   As they wandered in the wilderness, God miraculously provided the sustenance of manna and water to the people of Israel,  wherever they were.  They might have considered that they’d arrived once they reached the promised land, but in accommodating to the pagan idolatry around them, they failed to notice the little deviations that eventually took them totally off-track spiritually.

Jesus once told his disciples that he was himself the Way, the pathway to heaven that we can follow.  The bread and the wine of communion, his body, is given for both direction and providence for the journey through this sometimes thoroughly disorienting world.

Light of the world
Bread for the way
Live wholly in us
As we travel each day.

When the woods are dark
And it’s hard to see
When the street’s unfamiliar
The wrong place to be.

Then let your Presence
Be the path that you’ve made
For you go on ahead of us
And we need not be afraid.