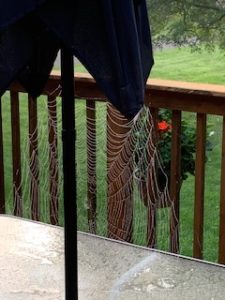 We had only been away for about five days, but in the damp September air, conditions proved perfect for our backyard spider to spin an elaborate web to trap unwary late-summer insects.

Because of the woods and the moisture of the nearby lake, nature’s growth thrives here.  We keep a constant vigilance to make sure it doesn’t take over our little bit of civilization. The shoot of a young sapling can spring up to knee-size in our garden within a few weeks.   It may be an odd thought, but it seems that even hair grows faster in this setting (although admittedly, the nearby village still has its share of bald pates, so this is an untested theory).

Our humble arachnid is named after the Greek woman who so flaunted her weaving skills she was punished by the goddess Athena.  There is such near-perfection in the web’s design, it’s understandable that it provokes jealousy.

The web is beautiful, but it can be easily destroyed.   It’s like the fragile interconnectedness which links all of us, the silvery web-strands of virtual connections we now take for granted as part of our world.  It’s so amazing and powerful and beautiful that we can easily become like Arachne who, with hubris, challenges Divinity.

There’s an old Danish Legend with a lesson for us all
Of an ambitious spider and his rise and fall,
Who wove his sheer web with intricate care
As it hung suspended somewhere in midair,
Then in soft, idle luxury he feasted each day
On the small foolish insects he enticed as his prey.

Growing ever more arrogant and smug all the while
He lived like a ‘king’ in self-satisfied style –
And gazing one day at the sheer strand suspended
He said “I don’t need this” so he recklessly rended
The strand that had held his web in its place
And with sudden swiftness the web crumpled in space.

And that was the end of the spider who grew
So arrogantly proud that he no longer knew
That it was the strand that reached down from above
Like the cord of God’s grace and His infinite love
That links our lives to the great unknown.
For man cannot live or exist on his own.

And this old legend with simplicity told
Is a moral as true as the Legend is old.

Anonymous, found in an old Bible circa 1940