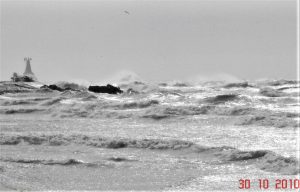 Although we’ve had a balmy fall, the gales of November came slashing last weekend as they often do, the gusts blowing down fences and branches, and knocking out power in the Port Stanley area.   The woods to the west of us afford protection from the wind, but also threaten possible danger from toppled trees.  Here, on the north shore of Lake Erie, storm winds can send impressive and fiercely frightening surges of waves on to the shore.  It can be a humbling reminder of our insignificance.

The storms of our lives are often memorable:  from the time in childhood when lightning struck the nearby pond and a fireball hovered in the air, to the tornado that pulled a majestic willow tree out of the ground by its roots on my in-laws farm.  My then-boyfriend discovered the destruction when he returned home in the early morning hours after our date.   This resulted in a reprimand by his crusty old co-worker:  he shouldn’t have been out in the early morning hours of the “Lord’s Day” as the news article had reported!

In August of 1990, a tornado struck the little hamlet of Frome just west of us, causing damage to half of the homes there, but also causing problems in our home on the east side of St. Thomas.  Our roof leaked with its torrential downpour and our basement flooded.

Sometimes we have no idea of what direction the storm will come.  A few years ago, while traveling the beautiful Natchez Trail through Tennessee, we heard tornado warnings on the radio, but hadn’t caught the location.  There was nothing to do but keep on going and hope we were traveling away from, instead of into the storm.

There are stormy times in our lives when we feel battered by the waves of change or trouble.   It was the prophet Hosea who warned that we are sowing the wind and reaping the whirlwind when we abandon worship of the true God, choosing to adulterously serve idols.  Wiktionary also interprets the meaning of this saying as “Every decision has consequences; a person’s actions will come back to them; if one starts trouble or takes actions in spite of the discontent they cause, one will incur negative consequences.”  In Dante’s Inferno, the lovers Paolo and Francesca are among those who forever spin in the tempests of the second circle of hell, because they been swept up in illicit passion:

“As the wings of wintering starlings bear them on in their great whirling flights, just so the blast wherries these evil souls through time begone.”

We pity the poor bird attempting to navigate a raging gale.  We pity these poor lovers, who have not considered consequences.

We know that all the powers of nature are in God’s hands, that he can send the storms of our life so that we learn to trust and obey Him in those times.  And this same God who is Master of creation can send the storm to stop a runaway Jonah or tame these winds to a whisper, as he did to speak to the prophet Elijah.

George MacDonald pictures this in his children’s classic At the Back of the North Wind.   In his story, God directs the North Wind in wild tempest or gentle breeze, specific to His purposes.   And we know Jesus, who calmed the raging sea by mere command,  is Master of both winds and waves, whether it be in Nature or our nature.

“They all shall sweetly obey thy will
Peace, peace, be still.”